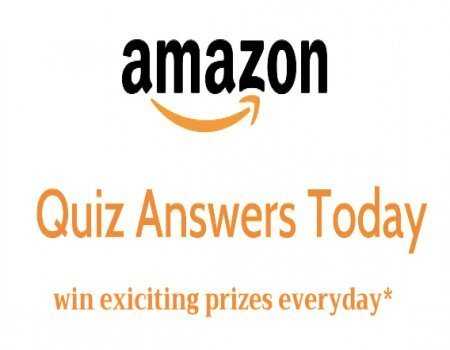 Q1- In which year was Mahatma Gandhi nominated for the Nobel Prize for the first time?
Ans: 1937

Q2- On which day in history did Mahatma Gandhi embark on the famous Dandi February?
Ans: 12th February 1930

Q6- Which of these books was NOT written by Mahatma Gandhi?
Ans: Long Walk To Freedom

Q7- The book ‘Unto This Last’ captivated and transformed Gandhi. So much so that he translated it into Gujarati. Who was it, the author?
Ans: John Ruskin

Q1- Using which bank's credit/debit card can you avail of up to 10% instant discount on shopping during Amazon Great Indian Festival?
Ans: HDFC Bank

Q2- How can you enjoy the Amazon Great Indian Festival early on?
Ans: All the Above

Q4- Where can you get Golden Hour Deals during the Amazon Great Indian Festival?
Ans: All the Above

Q5- What is this beautiful natural phenomenon called?
Ans: Only On The Amazon App

Note:- Scroll Down For other Amazon Quiz Answers

Answer The Questions and Win Rs 2,000

Q1- You can now get additional discounts on products listed on Amazon. over and above their existing price. Using which of these offerings can you avail of this benefit?
Ans: Amazon Coupons

Q2- The ____ is an ongoing event on Amazon., which offers Coupons giving additional discounts on over 6 lakhs products. What is this event called?
Ans: Coupon Carnival

Q3- Till when is the Coupon Carnival live on Amazon.?
Ans: 22nd October

Q4- Which of the following is NOT the correct way to reach to Coupons page on Amazon?
Ans: Sharing story on Instagram

Answer The Questions and Win Rs 5000

Q5- Which of the following is a feature of Nokia 5.3?
Ans: All the Above

Q1- As per the video, Toshiba VIDAA TV boot-up time is how many times faster than Android TV?
Ans: 3

Q4- As per the video, VIDAA is the #1 Smart TV OS in which of the following countries?
Ans: All of the Above

Q5- VIDAA OS has which of the following TUV Rheinland-certified protection? (Hint: the answer can be found in the video)
Ans: Privacy

Q1- What is the capacity of India’s leading smartphone battery in the Samsung Galaxy M51, the #MeanestMonsterEver?
Ans: 7000

Q2- Which of the below is the meanest processor in the Samsung Galaxy M51?
Ans: Qualcomm Snapdragon 730G

Q3- The display in Samsung Galaxy M51 is the first-ever in M Series. Fill in the blanks
Ans: SuperAmoled Plus Infinity-O Display

Q4- How many MegaPixels does the segment-leading Intelli-cam of Samsung Galaxy M51 have?
Ans: 64MP

Q5- The battery of the Samsung Galaxy M51 has fast-charged. Fill in the blanks.
Ans: 25

Q1-  What is the name of the product shown in the video?
Ans: Orient UV Sanitech

Q4- As shown in the video, what all items can be sanitized using Orient UV Sanitech?
Ans: All of the above

Q5- What is the hashtag (#) used in the video?
Ans:  #4MinutestoSafety

Q1- Which of the following options CAN be used to add Cash to the Amazon Pay balance?
Ans: Giving cash to the delivery agent for COD orders

Q2- There is no minimum limit on loading cash to the Amazon Pay balance. True/False?
Ans: True, you can start from Re. 1

Q4- You can use Amazon Pay balance for?
Ans: All of the above

Q5- Amazon Pay balance is accepted for payment at which of the following stores:
Ans: All of the above

Q1- Teacher's Day in India celebrates the birthday of which of these post holders?
Ans: 1st Indian Vice President

Q3- After a ruling passed in October 1893, which country became the first to give the right to all women to vote in parliamentary elections?
Ans: New Zealand

Q4- Which prominent social reformer and academic who campaigned for the Widow Remarriage Act was also referred to as 'Vidyasagar'?
Ans: Ishwar Chandra Bandopadhyay

Q5- October 2, 1945, was declared V-J day by US President Harry Truman. What did V-J stand for?
Ans: Victory Over Japan

How to avail this offer?

How to play in the Amazon Quiz Today's Contest?